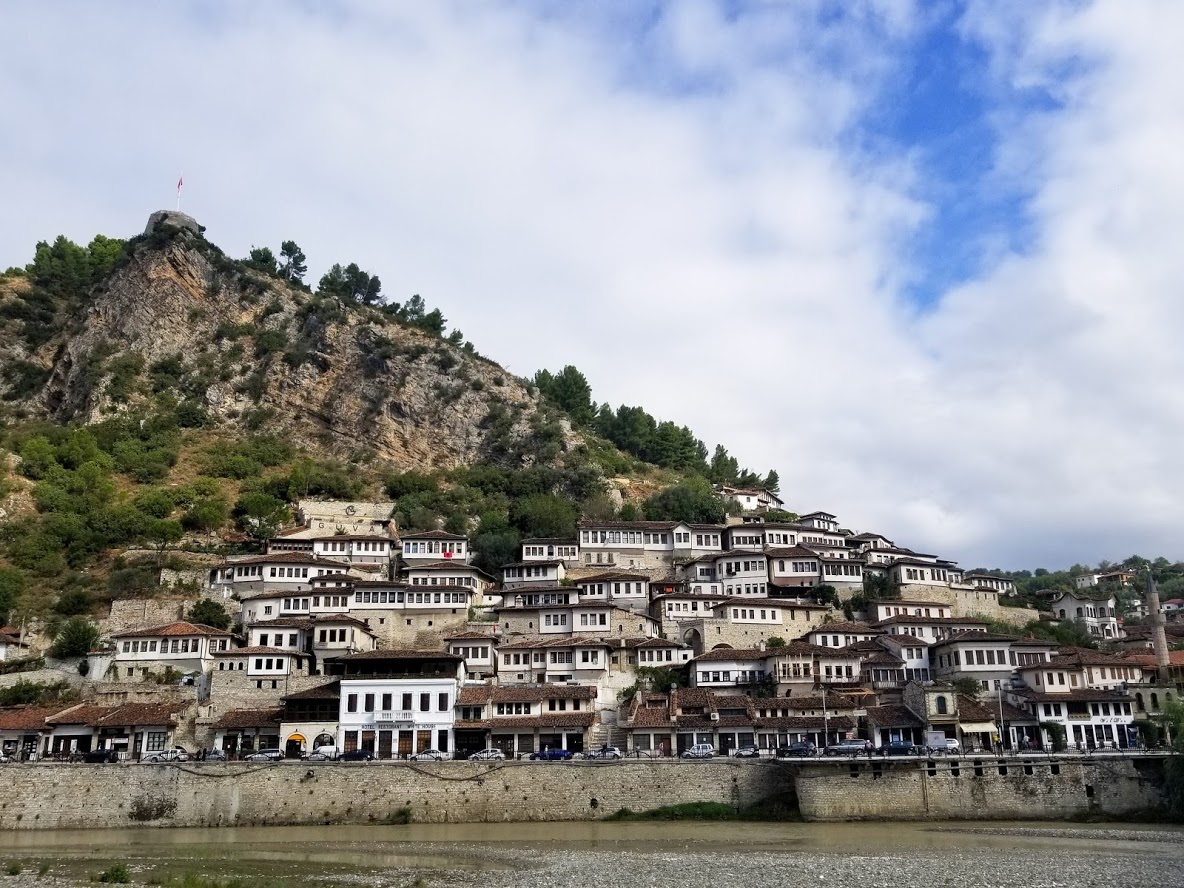 Having done all the Balkans a few years before, I heard that Albania was still decades behind from a touristic perspective and especially transportation. I assumed that the country would be hectic to visit and difficult to get around. Turns out that Albania is one of the best countries at the moment to visit as the they possess everything to make travelers delighted ; from delicious food, UNESCO world heritage site, amazing variety of landscapes and very warm and welcoming people. The roads are also in way better conditions than expected and although public transportation might be challenging, all conditions are in place for a fantastic road trip. These are some of the reasons why Albania is in my top 10 countries I visited.

We arrived at 1 am in the morning in Tirana and we were afraid to get scrammed by Taxi drivers as it’s the only way to get to the city during the night. Turns out people really wanted to help us out and the price is fixed to 2500 LEK / 22 USD and they didn’t try to negotiate higher.

After a little bit of sleep, we started walking around the city of Tirana. It’s a small capital considering there is less than half a million Albanians living in Tirana. It’s very different than other capitals of Europe as the city was developed under the communist regime in the 1950s. Until 1998 Tirana was close to the world and as unreachable as North-Korea is today.

The Tirana free walking tour is a must as it’s a city where you need explanations to really understand how the city was shaped.

After visiting the city and getting a Vodaphone sim card for the roadtrip, we left in the early afternoon to rent our car at Europcar (275 usdfor 12 days) and initiated our way to Shkoder. The ride to Shokder is great, the road goes through several cities and you can see castles and different landscapes while rolling on a decent highway.

We stopped at the Patoku Lagon to eat some fresh fish and later at lake Shokder for a beer.

Our evening was spent walking around in the city of Shokder. Even though it was a Sunday night, the city was buzzing with activity and all the restaurants were full.

Shkoder to Valbona – The man made lake Koman

The previous day, we parked our car in the hotel parking and left most of our items in the trunk as we only wanted to bring the necessary items in the mountains. We woke up at 6 am and shortly after, a van picked us up and started going around several hostels and hotels to pick travelers going towards the Lake Koman Ferry. The ride lasted several hours on bumpy roads and we eventually started going up the mountains and then though a tunnel where a small platform with several ferries were awaiting us.

Lake Koman is a reservoir due to a dam built in the 1990s. The ferry allows us to go straight through the mountains and save hours of car while enjoying wonderful views and a pretty unique ecosystem. The Koman fery is a unique activity to do and it allows you to visit a remote region – the only problem we saw was all the plastic trash floating everywhere on the lake.

We arrived in Fierza and a van going to Valbona dropped us near our B&B in the middle of the afternoon.

Valbona to Theth – crossing the peaks of the Balkans

The trek from Valbona to Theth isn’t a very hard one and there are several water sources along the way. The challenge was needing to carry around our backpack as we weren’t coming back to Valbona afterwards.

As we reach the summit, the path becomes steeper and the vegetation changes drastically.

On the other side of the summit, we got some incredible views on the valley where the village of Theth is located.

We arrived exhausted at Theth and after making some Dutch friends and drinking a few beers we went to bed thinking we would sleep deeply… Reality is that a dog barked all night a few meters away from our door.

Blue Eye of Theth and going back to Shkoder

The next day we started a hike after a great mountain breakfast filled with local products. The hike turned out to be longer than expected and due to our feets having blisters from the previous day it turned out to be very difficult.

After 2 hours of hiking down the valley while following the rivers. We entered a small village from where we started another hour of ascension towards the blue eye.

In the afternoon, for 60 euro divided by four passenger, we had a private jeep waiting for us to take us back from Theth to Skhoder. The drive is full of crazy swirls on a horrible road but these drivers have been driving the same road for years and they know it by hearth – hence they go at crazy speeds to maximize their revenue.

Berat – the Town of a Thousand Windows

After 4 hours of road from Shkoder, we arrived in Berat. The city has been designated a UNESCOWorld Heritage Site in 2008, comprises a unique style of architecture with influences from several civilizations that have managed to coexist for centuries.

The old city of Berat is divided by the river and the view from the bridge is incredible. There is also a castle at the top of the city and it’s unique in the sense that an entire city is protected by it’s walls. The view is also stunning from up there.

Berat is also one of the best places to eat local cuisines. We went to the Piccolo Grande Amore restaurant and the owner prepare an entire ”special” menu for us. We tasted a wide variety of fresh specialties from around the country for less then 40 dollars each.

After less than 3 hours of drive from Berat, we arrived Gjirokastër, a city older than 700 years that has several unique features. The city has a very cute small old district that was being partly renovated and improved when we were there. The roofs of the buildings are all made of slabs of rocks and this gives it a very interesting look. There is also a massive fortress at the top of the city that is absolutely worth visiting.

Butrint National Park and the beaches of Ksamil

Butrint National Park is an exceptionally preserved archaeological site with artifacts and structures, dating from the Iron Age up until the Middle Ages. You walk this massive site covered in ruins and with great explanations and you are in awe before all the civilizations built over time and the decline of the middle-ages. It takes a few hours to visit the ruins and there is also a museum within the medieval castle. We also took a boat ride across the Corfu straight as there are several locals wanting to sell you a boat ride in the parking – for 20$ why not?

The principal architectural monuments in the park includes a Roman theatre, Dionysus altar, Nymphaeum, Thermae, Gymnasium, Forum, Aqueduct, the temples of Minerva and Asclepius, the Lion Gate and a Baptistery situated in Southern Albania and declared a UNESCO’s World Heritage Site in 1992.

After an afternoon in Butrint, we headed 20 minutes north to Ksamil. The town is part of the Albanian riviera, some of the best beaches of the country are located here while boating a beautiful view on Corfu. Things get overcrowded in the summer, but visiting during the low season like we did, it’s a great place to relax.

We spent the afternoon relaxing, reading and swimming.

Sarande is a coastal city that is well located due to it’s proximity with the Albanian riviera, Butrint National Park and many beaches. We spent two days there in a Airbnb with a view on the sea so we could visit the surrounding attractions. However, the main reason we came here was to take a ferry that would take us to Corfu.

We simply left our car in the streets of Sarande, the country is extremely safe and we felt that no wrong would happen to our rented car. We bought out tickets to Corfu and spent the next hour and a half enjoying a small cruise on the Ionian sea.

Our visit to Corfu was a bit of a deception. Corfu living mainly on tourism and massive Cruise ships, the experience doesn’t feel the same. We did a full day visit of the island and also took a boat to go on the mainland and visit some caverns and villages. However, after 2 days we decided to come back to Albania as it was calling us for many reasons : the people, the food and the authenticity.

We started going north again after our time in Corfu. When we went south across the country, we were within the mainlands surrounded by mountains and driving mainly in valleys. Going North was a completely different kind of view as we took roads that followed the ocean. This road (SH8) is in my opinion one of the most beautiful roadtrip in the world. The mountains surge out of the sea and small valleys formed due to erosion between these giants while the road zigzags constantly offering an ever changing view. The drive was as much of a highlight then the small villages we crossed.

We spent two days relaxing in the village of Dhërmi at Drymades Beach. Almost everything was closed, a kilometer of beach was shared between less then 10 tourists. Perfect place to let go before returning home.

Vlore is a big coastal city we crossed on our way back to Tirana. We didn’t stop to visit the city itself but we did a detour to see the Manastiri i Shën Mërisë. It’s a small monastery on an island in the middle of an interior lake which can be accessed by small bridges.

The end of the trip in Albania

Our trip finished in Tirane where the trip started. The car company didn’t charge is the scratches we did going around the small streets of Berat!

We spent the last day visiting the city and it’s museums and the night going around several bars as our plane was at 4 in the morning.

Albania is definitely in my top 10 countries. 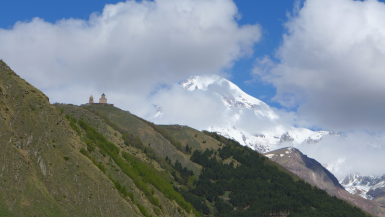 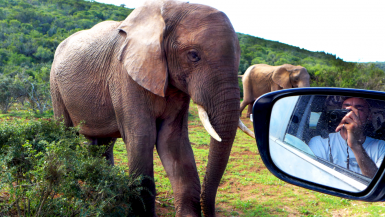 Two Weeks Around the Garden Route of South Africa