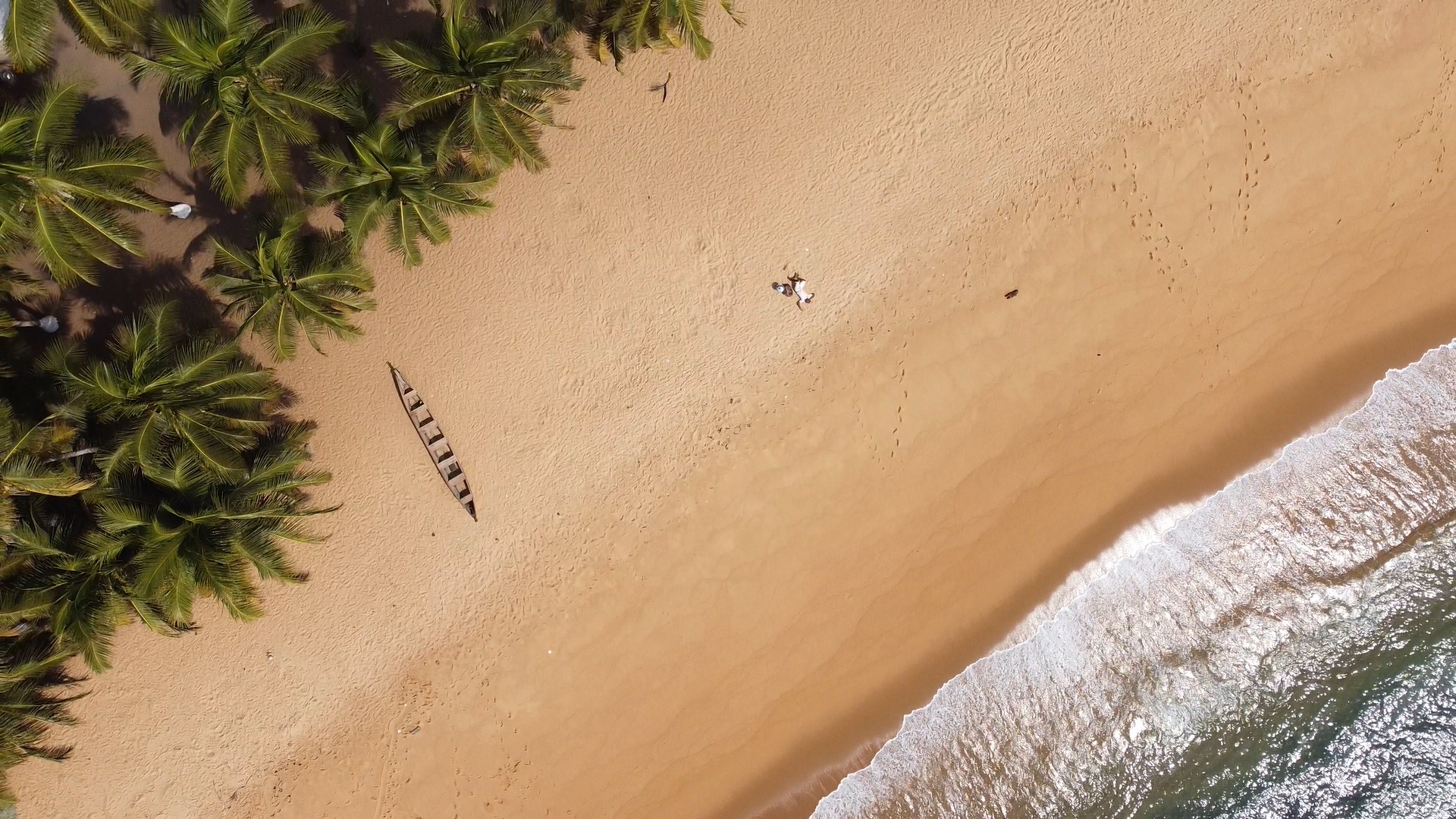 After a night transit in the Ethiopian city of Addis Ababa, we landed in Accra. Ghana was one of our only options as a new wave of Covid was sweeping most African countries. Ghana was one of the countries resisting a new wave with barely any cases reported in the previous few weeks before our arrival. Also… the idea of spending xmas on the beach was also very appealing to us after a month in Namibia camping in deserts.

As soon as we landed, we merged in a corridor where a mandatory PCR test was required. The entire process lasted 15 minutes – fill a document online, pay at the first counter (150 USD – ouch!) and a health worker directs you to a cabin for the test. Afterwards, by the time you pick your bag and head to the immigration line-up, the officer has your result. If you test positive you will then be escorted a government COVID facility.

When doing online research on Ghana, what seems to standout is how welcoming and friendly they are. After interacting with a few people working at the airport and having the visa officer give us his Whatsapp – I was already convinced that we were going to have a good time in Ghana.

We spent a few days in  Accra, after so much time on our own in Namibia, it was nice to meet other travelers around the pool. Our hotel was called Somewhere Nice and it definitely was. Many locals used it as a day office and we made a few local  friends.

Most people nickname themselves with the day of the week they came were birthed.. Being born on a Wednesday my name was Kweku Frank and Aleks was Kojo. Other Kweku’s became instant friends.

The city of Accra can hardly be qualified to be nice or beautiful but it compensates with its liveliness and it’s people. Air pollution is a major issue and I’ve rarely seen a city with as much trash around.

Walking around some neighbourhoods we encountered a few monuments, churches and an old fort.

In Ghana, people drive like crazy, on awful roads where trucks from another age can hardly go faster than 30 kilometer per hour. Drivers all try to overtake these trucks, but the drivers coming from the opposite direction are also trying – hence many deaths. I can easily state this was the most extreme and reckless driving I saw in nearly 70 visited countries. We witnessed near fatal accidents and saw several crashes on the roadsides and we didn’t go around the country much. Interestingly, there are funeral coffin shops every few hundred meters on these roads.

The fishing village near Elmina

For our first stop by the beach, I found a remote hotel near the town of Cape Coast. The fishing village has no name on google map and no roads are shown to get there. Getting there by taxi was a challenge.

We stayed at the hotel with the blue roof.

Our stay was good except for the food. Locals are too polite to tell you that some ingredients are missing – they will either not prepare it and hope you forget the order or walk around the town for hours trying to get the missing ingredients. We received our food almost four hours after ordering once. To prevent this from happening, our trick for the rest of the trip was to ask what they had available and just go with the recommendation : which consisted mostly of rice and chicken.

In the village, the life at sea didn’t change much in the last centuries. Fishermans go out at sea and on their way back, the village helps them to pull their boat on the beach. It can take a dozen men to get the it up sand where the tides can’t reach them. A leader yelled : HEEEEBAAAAAAA to get everyone to coordinate the pull. Between the commands, he would arrange the wooden logs on which the boat slided.

After the boat is stationed up the beach, the owner of the boat gives a few sardine sized fish to those who helped him. I was told they made fish soup or fried them.

The kids of the village spent most of their day on the beach – their school being shut since Covid started. They played and swimmed and liked to follow us around. Like a lot of Ghaneans, they called us Obrounis which means‘’white man’’.

Once I got the drone out, many kids came running and for them it was completely mind blowing (it would have been for me too 20 years ago! Drone are still pretty new.) They showed us their backflips and crazy dance moves – my day camp counseling experience took over and we had quite a lot of fun.

Our next top was the famous village of Busua. Famous for one of the biggest music festivals on the east coast of Africa and also it’s surf and vibe.

We decided to spend nine days there including Xmas. I do not have a lot of pictures of Busua as when we left the hostel to eat or surf, we left all our belongings in our room.

We had our routine : wake up at 8:00 and be in the water around 9:00. We would surf around two hours and then relax and eat lunch at the surf school/restaurant. In the late afternoon, once the heat reached it’s peak, we went back in the ocean to cool off. The evenings were spent reading mostly.

We kept this going until a morning I started feeling exhausted. Aleks went in the water without me that day. As the day went by, my condition kept plummeting. Extreme weakness, intense joint pain, chills, fever kept me down for several days – hence, I spent Xmas eve and Xmas passed out in a hammock. It took me a week to regain my energy. I knew malaria pills were not infallible but with 3% of global malaria cases and deaths, Ghana is among the 15 highest burden malaria countries in the world. People catch malaria often multiple times a year and for them what I was having was completely normal.

Our friend and surf teacher also took us on some walks to visit surrounding villages and forts.

We left Busua, and made our way to Cape Coast. There really isn’t much to say about this city. The only reason we stopped here was to visit Kakum National Park.

Kakum National Park is 45 minutes north of Cape Coast and is a protected cloud forest. There is a canopy walk that is interesting and you can also have a guide show you around some path in the park.

Overall, I don’t think I can recommend Ghana as a country to visit unless you are running out of options. I am however glad that Covid brought me to this country between two waves – it was the place during our entire trip with the greatest sense of normalcy. While we were in Ghana, only one reported case of death was computed. The second wave to hit the country not long after we left was more brutal.